Automatic lighting controls are widely used in public, commercial, industrial and residential buildings. Their main purpose is usually energy saving, switching lights off or dimming them down when they are not needed, but other considerations are safety (lighting steps and stairways when they are in use), security (lighting gates, entrances and perimeters when someone approaches) and the prevention of unnecessary light pollution by switching off outdoor lighting when it is not required.

This short introduction explains the main technologies and techniques used for these purposes.

WHAT IS OCCUPANCY & MOTION SENSING IN RELATION TO LIGHTING?

Occupancy, or motion, sensing are the processes of using a sensor to detect if someone is in the area being monitored and then to switch the lights on or off accordingly. Typically, a passive infrared (PIR) or microwave (MW) device is used for this.

There is no rigid distinction between “occupancy” and “motion” in the field of PIR and MW sensors. Different people use these terms in different ways and some people use them interchangeably. However, “occupancy” is often used to mean sensitivity to small movements and objects (such as somebody’s fingers moving over a keyboard) while “motion” is often used in relation to larger objects and movements (such as a postman approaching your front door). If you are responsible for buying or specifying sensors, we suggest that you should say exactly what level of sensitivity you require rather than relying on these two words alone to describe your needs.

The less sensitive “motion” sensor is not necessarily inferior to the more sensitive “occupancy” sensor. Each one is appropriate for particular applications. A highly sensitive device would be most unsuitable on a building perimeter where it would trigger with every passing bird or fox. Conversely, an insensitive device would not be appropriate in an office where it would fail to detect the small movements of someone typing at their desk – they would have to keep waving their arms to stop the lights switching off.

WHERE CAN PIR AND MW SENSORS BE USED FOR LIGHTING CONTROL?

Passive infrared (PIR) and microwave (MW) sensors can be used for lighting control in many different ways. Here are just a few: 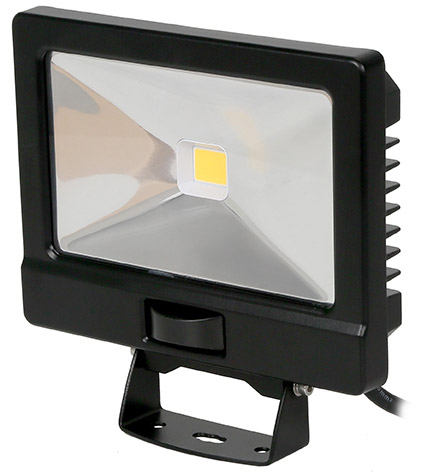 A floodlight with a built-in PIR occupancy sensor. In this case, because it is for exterior use, the PIR is designed to be sensitive to larger moving objects such as humans, but not to smaller ones such as cats and mice. This is to avoid false triggering or “nuisance” switching.

A microwave could also be used in this application but there is an increased risk of false triggering as it can be sensitive to any moving object, including blowing leaves or litter. 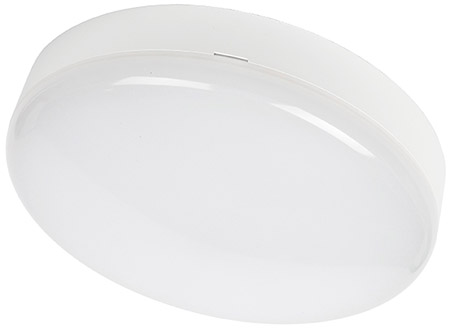 This is a fitting designed for use in corridors and stairwells in, for example, care homes and apartment blocks.
A microwave sensor is located internally (out of sight), but it can work through the front cover to detect people moving in and out of the area.
Used like this, the energy savings from deploying occupancy sensors are often over 50%. 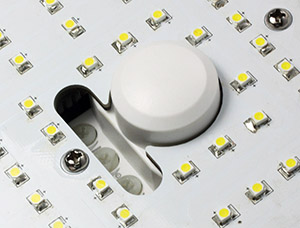 Close-up view of the sensor inside the corridor fitting.
This is two sensors in one. A microwave device detects occupancy and a lux level sensor ensures that the light is only switched on if the ambient light level is below a pre-set threshold.

The three adjustment dials, just visible, enable the installer to adjust 3 parameters:
- the lux level for switch-on,
- the time delay after the last persons leaves before the light switches off and
- the occupancy detection range.

This fitting is designed for use in warehouses where intermittent occupancy is common. Manual switching is not practical, so automated lighting control is widely used to save energy.
In this example from NVC Lighting a sensor can be specified. Most often this will be a PIR occupancy sensor with a built in lux level sensor to give both on/off and dimming control. 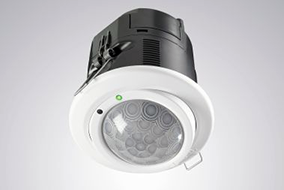 This is a PIR occupancy sensor designed for installation in a ceiling. It incorporates a light level sensor too.

Such sensors are widely used in offices and classroom and will typically control a group of up to about 20 fittings.

This PIR sensor is much more sensitive than the PIR sensor used in the floodlight (above). The floodlight sensor should only react to whole-body movements to avoid false triggering, while this sensor will react to movements as small as fingers moving over a keyboard.

In lighting control applications, it is common for passive infrared (PIR) and micro-wave (MW) devices to incorporate light level sensors too. This can be done in two ways:

These are some of the most widely used terms in the field of lighting control:

Presence detection means using a sensor to switch lights on when someone is detected moving into an area and switching them off again when they leave. The sensor switches the lights on and off.

The disadvantage of presence detection is that it will often result in the lights being switched on even when it is not strictly necessary. Imagine – you leave the office, switching the lights off as you go, but then remember you have left your phone on your desk. As you re-enter the office to pick up your phone the lights switch on, even though you were only there for a few seconds. Eventually, the sensor will switch them off again, but in the meantime, electricity has been wasted. In this situation absence detection would have been more suitable.

Absence detection is preferred in most office and commercial environments as it maximises energy savings but it will not be suitable in a warehouse where the distance to the nearest light switch might be great and where people will often have both hands full. 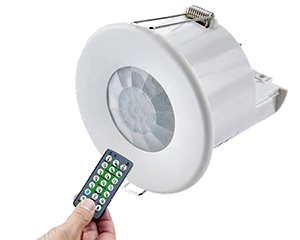 Time delay. There will always be a delay between when the sensor last detects movement and when the lights are switched off. If there was no time delay the lights would be continually switching on and off very quickly. On all sensors designed for lighting control the time delay is adjustable, usually from about 30 seconds (minimum) up to about 30 minutes. Adjustment can be carried out either with a remote handset (pictured) or with switches or dials on the sensor itself. 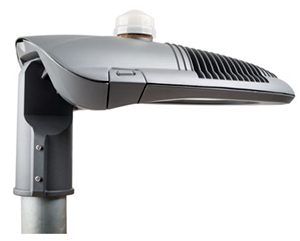 A street light with a photo-cell fitted.
The photo cell is pointed upwards so it is not influenced by the output from the street light it is controlling and can accurately detect the level of natural light.
Usually it will be set to switch the light on at 20 lux (dusk) and off at 80 lux (dawn). This is often known as a dusk-dawn photocell.
To read more about light level sensing, please read "Light Level Sensors" article

A switch-off light level is sometimes used for interior lighting. If this is required it is important that the light level sensor is oriented so that it is detecting the outside (natural or background) light level and is not measuring the interior (artificial) light level. To achieve this the sensor can be fitted to the outside of the building (for example, on the roof) or the sensor must be located near to and oriented towards a window.

A lux (light level) sensor, designed to be installed on the outside of a building. It detects the level of natural light, uninfluenced by the level of artificial light inside a building. This could be used to implement daylight dimming/daylight harvesting – see below.

These processes all use a photocell to determine an ambient light (lux) level and use the output from the photocell to alter the amount of artificial light being produced. The differences between them are as follows:

One sensor per fitting. This is one of the simplest forms of lighting control, using one sensor (such as a PIR or MW) in every fitting. In this situation each sensor controls just one fitting. This has advantages and drawbacks:

Master/Servant. An alternative is to have a sensor in one fitting (the “Master”) controlling a small group of other fittings (the “Servants”).

Both of these are relatively simple approaches, suitable for smaller and medium sized installations. Larger installations will benefit from more sophisticated approaches such as DALI networked systems or even wireless mesh networks. In both of these there is much more flexibility allowing for multiple groups and more varied relationships than just master and slave.

Where are occupancy sensors required?

Occupancy sensors are most widely used in indoor areas where there is a significant level of energy consumption for lighting and where occupancy is intermittent. Examples are warehouses, classrooms and offices.

Are occupancy sensors required by law?

No, there is no legal requirement to use occupancy (or motion) sensors. However, building regulations and other measures are in force in many countries that encourage energy efficiency and the use of occupancy sensors is often a means of achieving compliance with these.

Do occupancy sensors save energy?

Yes, occupancy (or motion) sensors can save up to about 75% of the energy that would otherwise be used for lighting. Many of the most significant savings can be made in warehouses where light levels should be relatively high (to assist with fast and accurate picking without eye strain) but where occupancy is often very intermittent. Many warehouse aisles can be un-occupied for many hours a day, so lighting controls here can save substantial amounts of energy.

What is most cost effective, switching or dimming?

Switching lights off when they are not required is simple and energy efficient. However, simple presence or absence detection will not maximise the savings that could be made by dimming in response to changing levels of natural light.

Switching and dimming in response to daylight, while it can maximise the energy saving, will require more time to be spent on commissioning and will also require dimming drivers in the light fittings to be controlled. Please check "What is Dimming ? " article for more details.

How do you programme an occupancy sensor?

Occupancy (or motion) sensors can usually be programmed using either a hand-held infrared programmer or using the dip-switches or dials provided on the sensor itself.